A sprained or torn MCL is a phrase that you may have commonly overheard; but what does it mean? When speaking of the MCL people are commonly referring to the medial collateral ligament of the knee. Injury to the MCL is one of the most common knee injuries, especially with athletes. When injuring the MCL other ligaments may be injured with it as well depending on the extent and mechanism of the injury. It is a very common injury to occur among athletes but can happen during a motor-vehicle accidents, slip and falls 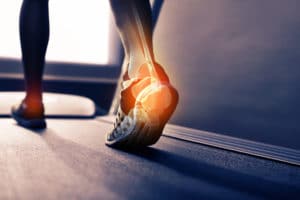 or other many other situations.

An injury to the MCL is non-contact in nature most of the time and results when if a person twists their knee inward while planting their foot. Often times the knee will be in a position of flexion and the leg will be externally rotated; at this point a blow to the outside of the knee will cause the knee joint to fall in toward the midline of the body and create a sheer force on to the MCL as well as the ACL and meniscus.

The outcome and treatment of an MCL sprain usually depends on the grade of the tear. A grade I occurs when the ligament fibers are pulled which will cause some local inflammation but are not torn. A grade II occurs when the ligament fibers a partially torn and a grade III occurs with a full tear and separation of the fibers. Generally grade I-II and even III injuries are managed conservatively and in a non-surgical fashion due to the extensive blood flow the MCL receives. If more fibers or ligaments are involved such as with a grade IV sprain surgery may be indicated. If the ACL is torn along with the MCL, a surgeon may often wait for the MCL to heal up first before performing surgery to fix the ACL. An ACL tear will often require surgery because it does not receive as much blood flow as the MCL.

In the beginning treatment of the MCL involves rest, ice, compression, and elevation (RICE) in order to reduce pain and swelling levels. Treatment may also involve using a brace to immobilize the knee to avoid excess force and strain so the fibers of the ligament may heal properly. A patient may be informed to avoid bringing the knee into extreme ranges as well as avoiding movements such as squatting, running, jogging, going up and down stairs. Rehabilitation is focused to “re-activate” the musculature around the knee especially the quadriceps muscle. The muscles around the knee are often de-activated neurologically through a complex inhibitory mechanism that will occur after injury.

After the first couple of weeks depending the grade of the injury the aim of physical therapy is to gently increase the range of motion at the injured knee until it is symmetrical with the intact knee. Symmetrical range of motion is very important in preventing further injury to the body when returning to activities. A physical therapist will also work on the other musculature surrounding the knee, hip, and ankle including the glutes and hamstrings. Due to the proximity of the joints the knee is often a victim of what occurs at the hip and ankle; any instability at the ankle or balance deficits may create further insult to the MCL and it is important to address all of these impairments in physical therapy.

The MCL will usually heal up in 6-8 weeks depending on the extent and grade of the injury. It is important to work with a physical therapist during the rehab process to assure that your knee strength and flexibility is safely being progressed without any harm to the healing ligament. It is also important to make sure that balance and functional movement is safely restore at the end of the rehab process to avoid injuring the MCL again, which may happen if not properly rehabbed by your physical therapist.